I became a Zumba Zombie to get me into the spirit of my third book, Journey to the Anthropocene It is a complete departure from my earlier work. Big hint...it's full-color angry!

Elements of Humor for Artists & Writers 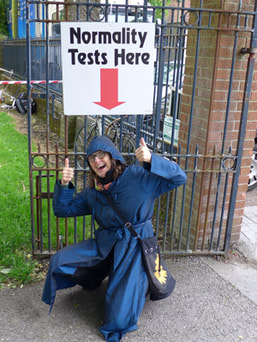 Let’s not let those words of warning scare us. Analyzing the reasons certain events make us laugh can help our career.  It is important to understand just what tickles people’s funny bone. When we laugh, it stimulates the flow of beta endorphins in the brain and creates a feeling of well being. There are many health benefits from laughing that are documented by medical researchers. Laughter lowers blood pressure, boosts the immune system, increases the heart rate, and improves oxygen flow. The important benefit is that humorous pictures and stories help people suspend disbelief. Laughter transports us to other worlds.

Understanding humor makes it easier to convey a story. Funny characters are a good starting point. Exaggerating, distorting, reducing, and enlarging features are all means of achieving funniness. Anthropomorphism, where we give non-human animals or objects human attributes, is commonly used. Even though some people dislike talking animals, anthropomorphism is still a hilarious vehicle for humor. I personally love talking animals, especially if they’re dressed like my mother.

Here are a few other methods to add funniness to your work:
HIDDEN ELEMENTS
Something unexpected is hidden from one or more characters. The viewer sees the total situation. It makes us laugh to know what will happen to the oblivious person. The hidden element will totally surprise the unsuspecting person. Something could fall from the sky, bump into them, or be a secret passage for the person to fall into. Silent films used this type of physical comedy.
Example: A hidden monkey is about to grab an elephant’s banana.

CONTRASTING ELEMENTS
Two contrasting elements are mixed for a silly effect. The elements can be age (old & young), time (antique & modern), size (huge & small), or anything that contradicts usual associations. They are ones we usually don’t think belong together. Contrasts can be between the artwork and the story line. What makes it funny is the dissimilarity between the two. We don’t expect the person to say such pairings.
Example: A banker counting out money for a customer.  “This little piggy went to market. This little piggy…”

COMIC PROPS
Objects can be used in a surprising way. An item can generate laughs by appearing in a place it doesn’t usually belong. The illustrator can add extra laughs by exaggerating the prop. Comic props that are not obvious need to be clarified in the text.
Example: Using a tennis racket as a food strainer.

SIGNS
Humor can be built around one or more signs. The signs can have a funny joke, a surprise element, a novel spelling, or be in contrast to the action of the story.
Example: Lemonade stand sign: Unwanted advice with each purchase.

GIMMICKS
A tricky or unusual idea is used for laughs. It can be a take-off on something familiar. An illustrator could parody a known style or artist by exaggerating or poking fun at that style of work. The gimmick could even be a strange layout or bizarre relationship of elements. It can be surreal or simply a goofy idea. It can also help explain the story.
Example: A man is juggling gorillas. Caption: Tarzan, King of the Juggle.

UNDERSTATEMENT
Something very unusual, dangerous, or exciting is happening in the illustration. In contrast, the story is very understated. The speaker ignores the obvious and is oblivious to the crisis, chaos, or dire significance of the situation....Or they are trying to be funny.
Example: A boy watches as his home burns to the ground. He says, “Darn, I didn’t have time to finish eating my beet salad.”

REPETITION
There is nothing people like better then feeling that they know the character. This is where repetition comes in. Once a funny situation has been established, they will laugh in anticipation of the coming funny event.
Example: Charles Schultz’s Peanuts: Lucy holding a football for Charlie Brown to kick.

FINAL INSIGHTS
It is easier to be funny when you feel happy yourself. The expression on your own face can be reflected in your work. If you want a smile on a character, smile when you draw or write. Keep your office full of joyful pictures, funny books, and music that lifts your spirits.

Be sure to remember your body. The tension from sitting at a desk all day can tighten your muscles and make you cranky. Take stretch breaks, then break into your own silly dance. A good silly dance or walk can loosen up one’s mind and body. They are best done in the privacy of your own studio.